Carbon intensity of coal per KWh

Carbon intensity of coal per KWh

The modern energy politics of developed countries are focussed on their aspirations to achieve carbon neutrality. This means the development of strategies for decreasing emissions of greenhouse gasses, the formation of “green” energy institutions, and the increase of investments in renewable energy sources. Despite the importance and irreplaceability of coal in the energy sector of the most developed and developing countries, legislators in the EU, the US, and several other countries have made the decision to label that energy source in particular as the main cause of environmental pollution and climate change. After the Paris Agreements took effect in 2016, several countries in the European block increased the speed of their reductions in investments in coal generation projects. In 2020, 50 billion dollars (-11.5% in comparison to 2019) were spent across the world on the entire cycle of coal projects (starting with coal mining at a new deposit and ending with the construction of new coal power plants and the repair of existing power plants). In 2015-2020, the average amount of investments in coal projects decreased by a third (on average, by 7.8% each year).

In the period of the decreasing carbon footprint, the carbon intensity of fuel in general and coal in particular take on a particular importance. Lower, it will be shown that CO2 emissions levels are not directly dependent on fixed carbon levels, if CO2 emissions are calculated per unit of energy produced (kWh).

In chart 1 and in table 1, carbon dioxide emissions data of power plants during the burning of various coal grades are compared. The calculation is based on a formula that takes into account the emission factor of a specific type of coal per 1 TJ of energy and the average heat efficiency of a coal-fired power plant.

Table 1. CO2 emissions coefficients for coal in USA[1] and Europe[2] and the calculated volumes of CO2 emissions by power plants (taking into account a heat efficiency of 36%).

A minimal amount of CO2 per unit of energy produced is emitted when using high-quality bituminous coals. Those eco-grades produce the lowest volume of CO2 emissions. For that particular reason, those coal grades are sometimes called as green coal.

Chart 1. Volume of CO2 emissions by power plants by KWh for various sorts of coals in the US and Europe. 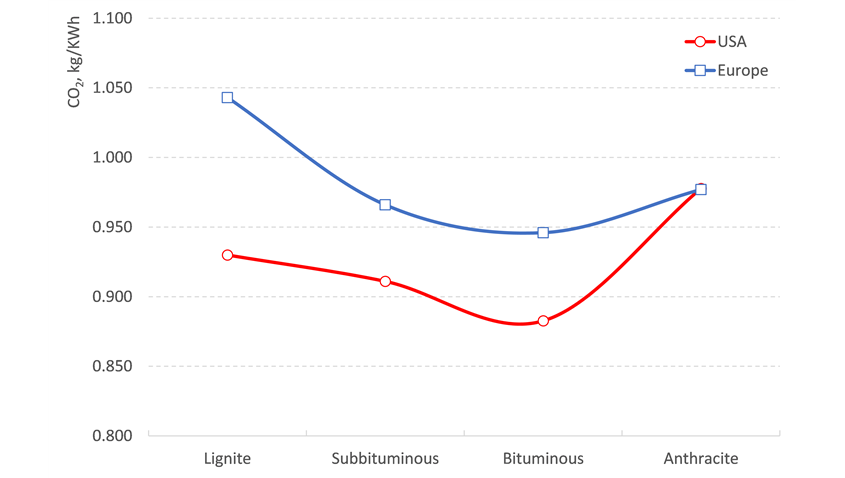 This rule is only broken when transitioning from low-volatile bituminous coals to anthracite, where the increase in carbon content does not lead to an increase in calorific value. Consequently, CO2 emissions per unit of energy produced begin to grow.

The international competition of coal exporting countries on the world market can be imagined in the following manner, accounting for the way coal grades and specifications increase or decrease emissions levels per unit of energy. In chart 2, it is shown that Indonesian coal, with export deliveries over 440 million t (the volume of country’s thermal coal exports corresponds to the area of its circle), is the most dirty type of coal on the market, while premium coals from Australia and Russia, on the other hand, are eco-grades. Such coals leave a minimal carbon footprint when calculated per unit of energy produced. In addition, these coals are characterized by a low sulphur, ash, and radioactive element content, which confirms their eco-friendly status.

Chart 2. Volume of CO2 emissions by KWh of main coal exporters on the international market.

Note: the weighted average calorific value of thermal coals delivered to the international market is presented on the chart; the actual range of calorific value is much higher.

When comparing coal with other energy resources, as a rule, not all variables affecting the final amount of polluting emissions are taken into account. Coal quality specifications such as calorific value, ash content, and sulphur content change depending on the type of coal.

The ash content of coal refers to the relationship (in %) of the mass of inorganic remains left behind after complete coal combustion in comparison to its initial mass. The main components of ash are oxides Silicone (Si), Aluminum (Al), and Iron (Fe), which can be emitted into the atmosphere or be left over in the unburned remains. Ash content of low-quality coal can reach 40-70%, while in high-quality coal it can be 10-12% or lower. Low ash levels limit emissions of toxic elements and metals both in slag and in fly ash, which is carried along with smoke into the atmosphere.

The sulphur content of coal refers to the share of the mass of sulphur in the mass of the studied sample of coal. This parameter can vary from 4% and higher in high-sulphur material to 1% and lower in low-sulphur coal. Accordingly, lower sulphur content results in lower SO2 emissions.

There are also technological ways to decrease polluting emissions into the atmosphere, e.g. carbon capture and storage (CSS).[3] Such so-called clean coal technologies allow for a 10-15% decrease in carbon dioxide emission levels, carry out a desulphurization of the emission gasses, and completely remove polluting chemical elements from emissions.

Coal-fired power generation, based on the combustion of high-quality and environmentally friendly bituminous grades is a more accessible and reliable alternative to renewables when taking into account the usage of modern methods of carbon dioxide capture. The variable nature of renewables, as well as the lack of effective technology for storing wind and solar power, can lead to energy crises. The mass electricity outage in Texas in February 2021 serves as a clear illustration of this. The windmills in Texas, vulnerable to low temperatures, and to any other sudden changes, froze still, leaving millions of people without electricity.

For the time being, coal is the cheapest and most reliable source of energy. Eco-grades allow consumers to burn them while minimizing harmful emissions to the atmosphere – not to mention what clean coal technologies allow. Thus green coal makes it possible to produce energy in a safe, reliable and eco-friendly manner.

[3] Carbon capture and storage (CCS) is the name given to a combination of innovative technologies that capture and store carbon dioxide deep underground, preventing its release into the atmosphere.