The upward trajectory in European gas, coal and emissions prices in recent weeks has been closely intertwined, with coal-to-gas fuel-switching prices moving up and up.

A tight supply-demand balance in Europe’s gas and coal markets this summer has driven the two fuels to compete to be lower down in the generation stack. And a sustained rally in European emissions allowances has dragged up fuel-switching prices — the range at which gas-fired plants of various efficiencies would be competitive with coal-fired units.

Strong gas injection demand because of low stocks, the prospect of northeast Asia drawing LNG away from Europe and a heavy Norwegian and UK maintenance schedule because of Covid-19-related postponements last summer has lent support to European prompt and near-curve gas prices (see stocks graph).

The German year-ahead base-load contract has risen by 89.8pc year on year, reaching its highest level in more than 12 years and trading at above €67/MWh on 12 May (see German front-year graph).

The easing of lockdown restrictions as infection rates fall and the vaccine rollout pace could continue to prop up European power prices. The UK is expected to end its restrictions on 21 June. France began to ease its lockdown earlier this month, while several German states are planning to loosen their restrictions in the coming days.

Dutch TTF front-month gas prices have risen faster than API 2 swaps in the first half of May to free up extra supply for injections.

Medium-efficiency 55pc-efficient gas-fired plants would be less profitable to run than 43.2pc-efficient coal-fired units in the power mix based on yesterday’s prices, while they would have been ahead in late April (see fuel-switching graph).

But despite a dramatic rise in TTF prices, they have not yet hit levels that would price in the bulk of northwest Europe’s coal-fired fleet. Fuel-switching has not provided the flexible demand-side response that it did in summers past — most recently in 2018 when Europe’s stocks were even lower than they are now.

This is partly because of Europe’s coal phase-out lifting gas’ share of thermal generation and reducing the potential to switch between the fuels.

But it has mostly been down to TTF prices being unable to catch up with the rise in fuel-switching prices, because of tightness in the coal market and emissions allowances at record-breaking highs.

The EU emissions trading system (ETS) benchmark December 2021 contract closed at €54.72/t CO2 equivalent (CO2e) yesterday, which was up by €12.28/t CO2e, or almost 30pc, from the start of the quarter (see emissions graph). It added about €14.60/MWh to the fuel-switching price — based on a 55pc-efficient gas-fired plant and a 40pc-efficient coal-fired unit — yesterday, up from about €11.30/MWh at the start of the quarter (see EU ETS graph).

The need for a return to coal burn in Europe has coincided with a tight Atlantic supply situation and strong Asian demand growth, driving up coal prices.

Low port stocks in the ARA region have supported European coal swaps. And Colombian supply is to remain constrained until later this year because of suspended operations by two key mining companies, Prodeco and CNR.

And Europe may have to compete harder for global coal supply this summer and the following winter. China’s ban on Australian coal imports because of a diplomatic dispute has driven up Asian prices, while strong power demand has boosted China’s coal burn.

Some supply issues have further exacerbated global supply tightness, such as heavy rainfall at times in the first quarter in Australia, Indonesia and South Africa because of the La Nina weather event.

No end in sight for carbon rally

EU ETS prices bucked expectations by continuing their rise in the first two weeks of May, even after the 30 April deadline for emitters to surrender allowances to cover their 2020 emissions passed.

A provisionally agreed new 2030 net greenhouse gas reduction target for the EU of at least 55pc compared with 1990 levels will probably require a tightening of the EU ETS. Proposals to this effect are expected to be presented by the European Commission in mid-July.

The steady upward trajectory of the carbon market — which last recorded a month-on-month loss in October — has also attracted increased speculative investor interest, which has played a part in the continued rise in carbon prices. This interest was probably consolidated by comments made last week by the commission’s vice-president, Frans Timmermans, who warned against any intervention in the market in reaction to the rally.

And rising European gas prices themselves have contributed to gains in the EU ETS, as lower prospects for coal-to-gas fuel-switching have spurred compliance demand for allowances to cover the resulting, more carbon-intensive, coal-fired generation. 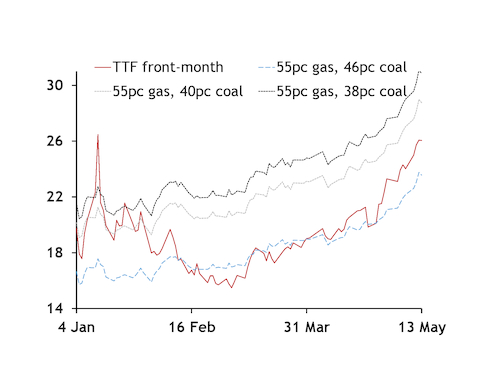 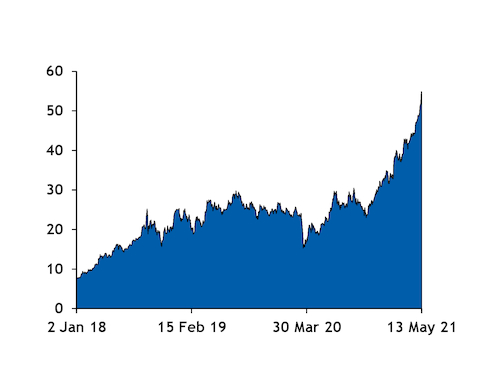 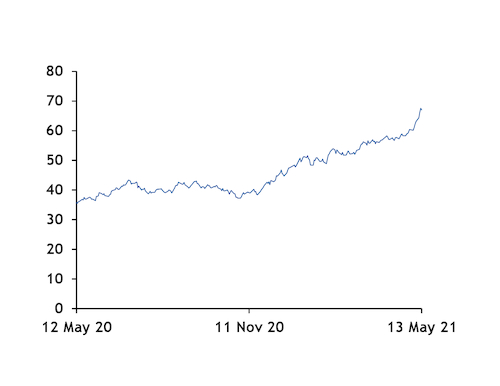 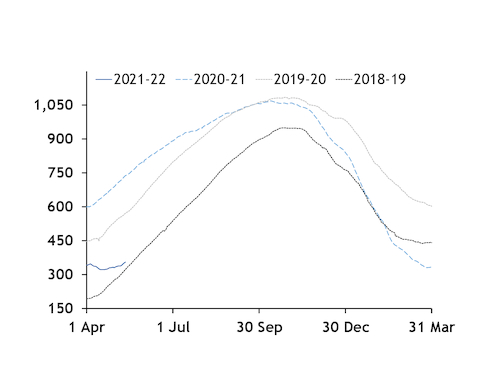