Permits for European Union carbon emissions rose above 30 euros ($34) a ton for the first time since 2006 as the bloc works to enact a sweeping overhaul to cut greenhouse-gas emissions.

Carbon futures climbed despite an overall gloomy economic outlook and with pollution set to fall to the lowest level in decades this year. 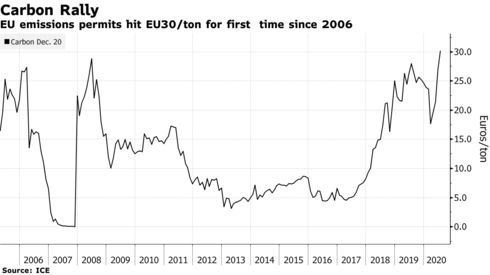 While actual emissions plunge this year, the price of permits has been seen to rise as speculative buyers bet on political efforts to cut pollution that could rely in part on the carbon trading system. Investors have also been cutting short positions in recent weeks after a record buildup in the bearish bets started in March.

The EU has proposed a 750-billion-euro package to help economies recover from the fallout of the coronavirus. The Commission may make funds available only to projects that are in sync with the EU’s climate-neutrality objective.

While rumors have swirled in the market that the buildup is driven by hedge funds and algorithmic traders, it’s also possible that companies that actually emit carbon and need the permits are buying them up ahead of the EU’s moves to tackle the climate crisis.

“For a 2020 horizon it doesn’t make sense. Emissions have taken a hammering and energy use is sharply down, followed on from a mild winter,” said Trevor Sikorski, head of natural gas and energy transition at Energy Aspects Ltd. in London. “For a longer-term point of view, it makes sense.”

The explanation for the rally may also be simple momentum, with investors buying in just because it’s going up.

“This seems rather to be technical signals leading to a self-fulfilling prophecy, with actions confirming expectations,” said Bo Qin, an analyst at BloombergNEF.

The increasing cost of European carbon prices has helped push German coal plant profitability deep into negative territory. The so-called dark spread — the price of electricity in the forward market, minus the cost of coal and carbon permits with an adjustment for generator efficiency — has slumped as the measure for natural gas has gained.