South Korean state-owned gas supplier Kogas’ sales to the power sector collapsed in May, suggesting that coal burn was robust in the face of lower overall demand, assisted by its cost advantage.
Kogas’ LNG sales fell by 510,000t on the year to 1.6mn t in May, company figures show. This was driven by sharply lower sales to the power sector, which touched at least a five-year low of 652,000t, compared with more than 1mn t a year earlier. Sales to city gas suppliers fell by 150,000t to 980,000t, an eight-month low.

A nearly 370,000t sales drop to the power sector implies that South Korea’s gas-fired generation was 9.6-10.8GW in May. South Korean gas output averaged 14.3GW in May last year, but was at least 3.5GW lower last month, Argus estimates.
South Korean coal output was likely to have been 18.4-19.6GW last month, assuming nuclear availability of 19.6GW was fully dispatched. This would be 0.5-1.8GW down on the year.
Power demand in South Korea took a hit from the Covid-19 pandemic last month, according to a report from the Korea Environment Corporation (Keco), a branch of the environment ministry. Keco also reported that the price of KAU19 emissions allowances fell to a 10-month low of 30,700 won/t of CO2 equivalent ($25.52/t CO2e) on 13 May owing to lower demand.

But coal-fired generation would have been more resilient as it remains competitive against gas in terms of average cost. Kogas’ monthly tariff for the power sector was 12,216 won/GJ in May, which implies a generation cost for a 60pc efficient plant of around $60.93/MWh. But Argus’ cfr South Korea assessment for NAR 5,800 kcal/kg coal averaged $54.59/t in May, which implies a generation cost of around $36/MWh for a 38pc efficient coal unit.
And state-owned Kepco’s coal availability was higher on the year, meaning that more coal capacity was available to meet peak demand throughout the month. The maintenance schedule published by Korea Power Exchange (KPX) shows that Kepco’s coal plant availability averaged 22.8GW in May, up by more than 2.5GW on the year.

Kogas’ tariff for June implies that coal is still competitive for power generation, but recent weakness in the oil market could make oil-linked LNG supply to northeast Asia more competitive with coal this winter.
Kepco’s coal use for power fell by 2.8mn t on the year in January-April to 23.7mn t, driven mainly by restrictions on the use of coal plants in December-March. South Korean thermal coal imports were 5.8mn t lower on the year at 37.2mn t in January-May.

By Evelyn Lee and Jake Horslen 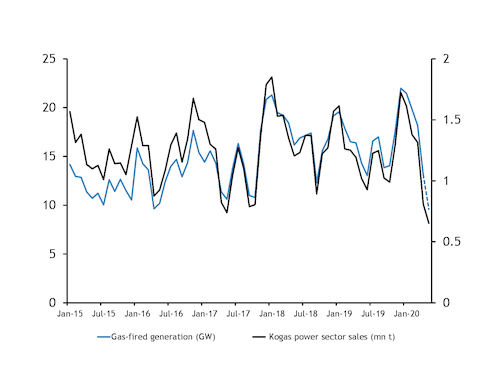